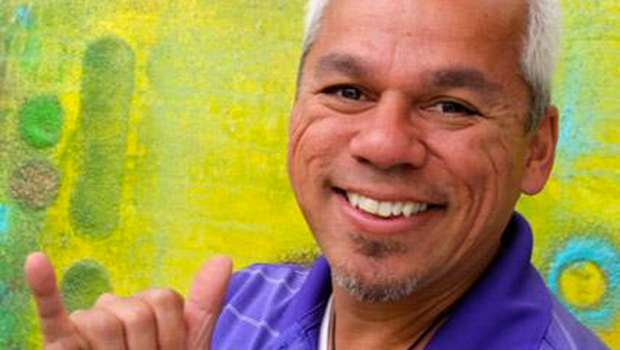 Each year, the Atlanta Foundation for Public Spaces presents a number of different events spread throughout the year that give Atlantans a chance to interact with the city and surround themselves with local art. Their upcoming event is a special one: the Buckhead Spring Arts & Crafts Festival at Chastain Park on Saturday, May 10 and Sunday, May 11 marks this particular event’s fifth anniversary. This award-winning, free festival brings together 175 artists and artisans, live acoustic music, a children’s area, and local foods and drinks.

Among the artists presenting their work at the Buckhead Spring Arts & Crafts Festival is MJ Villanueva. Villanueva’s artwork is focused in painting contemporary abstracts, with a fusion of color, texture and movement.

For this native of Hawaii, the move to Atlanta came courtesy of his partner. “My partner was originally from Atlanta, and he works for CNN,” says Villanueva. “He brought me over here.”

While Villanueva worked in a number of different culinary jobs, including teaching culinary arts in the Atlanta Public School system, he felt a need to reconnect to his love of art.

“I’ve always had a love for art. Having a culinary arts degree, I wanted to get back into it. I was working full-time, doing what everyone else does, just doing their 9-to-5 job. But at the same time, I had this drive to create my own art.”

He started showcasing his art at small festivals periodically. At one of those events, he met a few people who would change his professional life.

“Randall Fox and Patrick Dennis, who started AFFPS, saw my work at a festival and said, ‘Hey, we want to put you on. We love your work, and we want to feature Atlanta artists,’” says Villanueva. “So I hopped on board and started doing their inaugural shows at Atlantic Station. And that just snowballed into something else, and I thought, ‘Hey, I have a pretty good thing.’”

Among the strengths of festivals put on by AFFPS, according to Villanueva, is the ability to showcase art at a number of festivals without worrying about significant travel expenses. “The guys offer something to local artists, and we don’t have to travel anywhere. Some artists have to travel from state to state, doing these big festivals, which is great. But we can do something fresh, something that’s artists for artists, or artists for the hometown. They got me to really start small, and work my way big. And years later, I’m doing this professionally now. I get to do what I like to do, and be free with it. The guys are really great at helping out communities.”

Being gay, Villanueva loves seeing the local LGBT community involved in AFFPS events, including one of Midtown’s most famous street performers.

“One of my favorite things is Baton Bob was there at Piedmont Park last year and the year before. And everyone loves Baton Bob. So the artists had a little parade, and all of the rainbow people would come out and support that.

“So being gay, it’s a good thing to come out and say, ‘Hey, guess what? You’re not only supporting the arts, which we all love theater and music, but really to show more culture too.”

Beyond using his art as an outlet for his creativity, Villanueva also uses the proceeds of his art sales to help others. He’s a frequent supporter of charities preserving habitats for Hawaiian owls. He also supports LGBT-related charities, and with any sales that come from the Buckhead Spring Arts and Crafts Festival or the upcoming Peachtree Hills Festival of the Arts (May 31–June 1), Villanueva is donating 20% of his profits to nonprofits benefiting the LGBT community.

The Buckhead Spring Arts and Crafts Festival runs May 10–11 at Chastain Park, from 10 a.m.–6 p.m. Saturday and 11 a.m.–6 p.m. Sunday. Admission is free, open to all ages, and pets are welcome. For more information, please visit buckheadartsfestival.com.