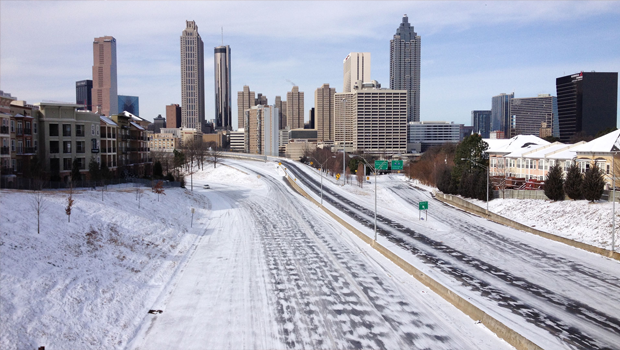 So, Atlanta – about that winter storm last week…

Normally when I’m writing these letters out, I’m doing so about a week before you all see them. In other words, the storm is more or less wrapping up as I write this. The snow’s melting, the roads are clearing up, and we’re starting to see temperatures above freezing.

The last couple of days have been…well, chaotic. I was born and raised in Georgia, so I’m familiar with how the state tends to shut down when a snowflake falls. But this particular storm was something else entirely. I was glad to make it home before sunset, but as I’m sure many of you did, I kept an eye on Facebook and saw how many of my friends and acquaintances were out well into the night, stuck in traffic or abandoning their cars and walking for miles to get home.

As tempting as it is to be angry about the people who helped produce this chaos (Gov. Deal and Mayor Reed, I’m looking at you two), I can’t help but think about the people and businesses that selflessly helped others during this debacle. I read story after story of people bringing food and water to those stuck in traffic, or of people giving others rides. The stories just go on and on.

Sometimes it seems like our society is becoming more toxic and combative. Chalk it up to changing social mores or the influence of the Internet era. That’s what makes the last few days feel both strange and heartwarming. Seeing people put aside their differences and unite in the face of a disaster? I don’t know about you, but that gives me hope.