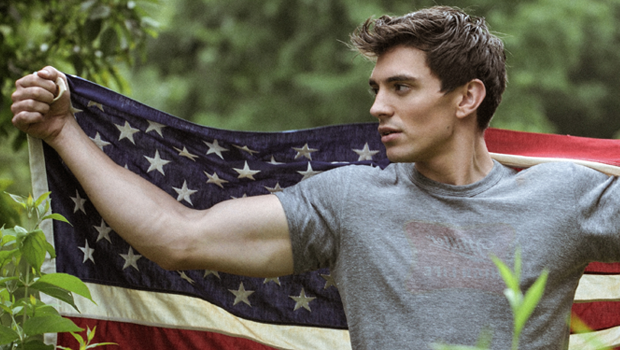 Over the Fourth of July this year, one man’s dream of success as a musician took off like a firework.

Pardon the clichés, but they feel appropriate when discussing 23-year-old Steve Grand’s sudden rise to popularity. Thanks to the viral success of the video to his song “All-American Boy,” including a BuzzFeed article titled “Meet the First Openly Gay Male Country Star” (though Grand doesn’t necessarily consider himself a country artist, and there are other openly gay male country artists), “All-American Boy” kept the Internet abuzz over the holiday weekend. Appearances on CNN and Good Morning America soon followed.

Now, Grand is making his Atlanta debut during Atlanta Pride on Saturday, Oct. 12. Before his appearance, I spoke with Grand about the success of “All-American Boy,” his follow-up to the song, and much more.

It’s been a few months now since “All-American Boy” took the Internet by storm. How have you been handling reaction to the song since it blew up?

It’s been amazing. I’m very grateful to the people who have passed it around and made it so successful. I’m grateful to have an audience now – people who have put their trust in me. That’s been the most amazing part of this. Now I’m playing at a lot more shows all over the country, so that’s been amazing. I’ve always dreamed of doing that, so now I’m getting to live out that dream.

You just released another song a few weeks ago called “Stay.” Why did you go with this song as your follow-up to “All-American Boy”?

Well, I kind of felt that sonically, it fit, and also I felt it was a good departure. It still fits in with the musicality of “All-American Boy,” but the tone is very different. It’s a lot happier. It’s a lot more upbeat. It’s a lot more fun, and I wanted to do something fun, even though we were going into fall. And the message of “stay with me,” it’s a message to the people that were affected by “All-American Boy.” It’s a message to them to stay with me.

“All-American Boy” struck a chord with so many people, in large part because of the unrequited feelings shown in the video. Was that based on anything you’ve dealt with personally?

Oh yeah, definitely. Ever since I was a 13-year-old boy, I’d been crushing on someone. I grew up in a predominantly heterosexual world. People were just not visible in my world growing up, and I’m sure that a lot of us can relate to that – especially in the days before the Internet, and especially those of us who grew up in smaller towns or not in an urban environment. I’ve felt that a thousand times, falling for somebody you can’t have. And I don’t think it’s exclusive to the gay community. I think that it’s a universal story. We’ve all felt that at some point – falling for someone we can’t have.

You’re coming to town for Atlanta Pride, and I know you’ve struggled in the past with accepting your sexuality. So for you, what does Pride mean to you?

Well, I remember my first Pride. I was 19, and I had struggled with my sexuality for years before. I was not really accepting of it. I wanted to change, and it took me years to finally accept that this is who I was, and that this is not a bad thing. So I had to completely reshape the way I looked at life and the way I saw myself, and reshape my life and my understanding of the world and people. So Pride has always been a very triumphant time for me. Like I said, I’ll never forget my first Pride. I was 19, it was in Chicago, and it was just amazing to see everybody out and everyone being crazy and celebrating, and everyone was so nice to each other. Everyone’s there to celebrate our differences, big or small. It’s what unites us all. It’s a very beautiful thing. And a lot of people have a lot of different opinions about it, particularly outsiders to the community, but I think Pride is a beautiful thing.

Speaking of Pride, what are you planning on doing at your performance?

I definitely plan on playing the songs I’ve released, some covers, and some songs that I have yet to release.

What are your plans for releasing more music? Are there new singles or an album in the works?

My plans change every single day, like, multiple times a day. (Laughs) I’m always looking at new music. I’m always trying to keep my focus on the people who’ve been supporting me and making music for them, because it’s easy to get swept up in everything that’s going on, but at the end of the day, they’re my priority. I’m making music for them. It’s what I do now. I work for them. And so…as far as what I’m doing, I can’t answer that. It’ll be something I decide at the last minute. I do have a lot of music in various stages of completion, and we’ll just have to see. I can’t give you a straight answer on that, because I don’t even know. I’m always working, and ideas are always flooding my mind. I’m always thinking about the next project, the next song, and when I eventually release a whole collection of music, whether it’s an EP or an album – this is my life now, this is my work. But I’m not a good planner. I’m terrible at planning ahead. Both of the songs and the videos were just – I did them kind of sporadically. With “Stay,” a month before its release, I called up a friend and I was like, “We’re going to do this video. Here’s what we’re going to do,” and I never give myself very much time. But it makes for an adventure, you know. It really is an adventure. It’s crazy. And after every video, on the final day of shooting, I just have this feeling of incredible triumph because it’s such a journey, and there are so many obstacles and so many things that seem to get in the way. You do face a lot of resistance on so many levels, but it’s a great feeling to break through all kinds of barriers and have something beautiful come out the other side.

So far in your career, you’ve gone the indie route. Do you plan on sticking in that, or do you have any interest in pursuing something like a major label contract?

I’m not closing any doors, but I’m pretty happy with the way things have been going so far. I’m assembling my own team, and…I’m not going to close doors to a record label, but it’s not what I’m pursuing at the moment, at least. I can definitely state that. But who knows. I do like the indie route. I think it’s the way of our times now. The Internet allows you to do that: make music for cheap and release it to everybody.

Now, especially when “All-American Boy” came out, people were quick to label you as a country artist. Do you feel that label’s accurate, or do you think there’s a better way to describe you and your music?

I don’t spend a lot of time thinking about how to characterize it. I mean, it clearly sounds country to some people and doesn’t sound country to others, so maybe it just doesn’t fit in one of those boxes. Maybe we just all have to accept that! Maybe it’s some kind of combination. It’s a spectrum, and nothing fits neatly into one category. I don’t really care how it’s labeled. I just make the music, and people can decide what to call it.

Who or what inspires you musically?

A lot of things. As far as artists go, I grew up listening to The Beatles and the Rolling Stones with my dad, and then Billy Joel and Elton John made the piano cool, and they inspired me to play rock and roll on the piano. But I’ve been influenced by the people in my life and the relationships I’ve had – relationships where I’ve been in love, and friendships, and growing up and learning to become an adult and find your own way, and all the struggles of coming of age. All of those things inspire me.

You’re certainly the subject of a lot of crushes these days, but for you, who’s your celebrity crush?

Hm. I’ve always had a thing for Bradley Cooper. (Laughs) One time, I was in a movie theater, and I was with some of my friends, and I was feeling goofy. A preview came on for one of his movies, and he was on the screen. Just as it got quiet, I was like, “Hold me, Bradley Cooper!” And the whole theater heard me. But Bradley Cooper – you could just get lost in his eyes all day. They’re beautiful.

Is this your first time visiting Atlanta?

It will be, yeah! I haven’t done a lot of world traveling, or any traveling in this country, so this is my first time in Atlanta. I don’t know a whole lot about Atlanta, so I’m excited to learn and explore a little bit.